There is definitely no wait at Stash Cannabis Company in Beaverton, Oregon, the past couple of days. Since the deadline for Oregon’s medical marijuana dispensaries passed on December 31, stores that have been waiting for their licenses from Oregon Liquor Control Commission (OLCC) are seeing a lot fewer customers.

It’s so bad that they had only two sales on January 4, for $125.00, and barely over $100 the previous day. The typical sales at Stash Cannabis Company, before they were forced to go back to medical-only sales, was about $4000 a day.

“At that pace we will be at $3000 for the whole month,” explained Chris Mathews, owner of Stash Cannabis Company. “We’re turning away 75 or 80 people a day, at least.”

The problem has been devastating for dispensaries that are stuck in limbo between receiving their OLCC licenses and the deadline to end early sales that passed on December 31. These dispensaries, which had been allowed to sell to the recreational market since October 2015, are now out in the cold.
Mathews paid for his application on December 13, after waiting since August on a letter from his landlord showing he had legal occupancy of the building—an application requirement even though he had an operating medical dispensary under the Oregon Health Authority (OHA) system licensed by the city of Beaverton as a medical marijuana dispensary. He has still not gotten an appointment for an inspection walk-through, the last step before licensing. In fact, he may have fallen further back in line, according to his most recent conversation with OLCC.
Mathews emailed OLCC for the status of his application on December 21. They responded, telling him he was 10th in line. Anxious about the looming deadline, he emailed again December 27, and found he was still 10th in line. Finally, he checked on January 4 and found he was now further back in line, suspiciously moved to 15th!
“It’s frustrating,” Mathews told Oregon Cannabis Connection (OCC). “I have met all the requirements, I took the Metrc training, and I’m just waiting for an inspection.”
He has been given no timeline, either. “They told me to call back next week and they will tell me where I am at then.
Washington and black market benefit
Martin Nickerson simply closed his McMinnville, Oregon, dispensary doors at Ocean Grown Cannabis Company. He knew it was a pointless endeavor to try and operate when the vast majority of his customer base was forced to shop elsewhere—which he knows means Washington state. Originally from Washington, Nickerson understands the market there and has even been told by his customers that’s where they are willing to go.
“We’ve shut down until we get our OLCC license,” Nickerson told OCC.
“The dispensary was being hit so hard on loss of product. We were watching customers go right to the black market or they are going right across the border to Washington,” Nickerson explained. “If you go across the border to Washington … they’ve got 50 different kinds of concentrates from $18.00 to $24.00 a gram. I have had customers tell me if it’s that much cheaper and there’s that much selection and accessibility to product, it’s worth the drive.”

The county was holding up his Land Use Statement, or LUCS, which is a required part of the application. They received the LUCS January 4, the day we spoke with him. The OLCC now has a completed application and he is awaiting inspection.
“I want to see them helping us and not hurting us. If we could just work together and talk,” Nickerson said. “I appreciate the work they put in and all the time and effort that has gone into legalizing marijuana in Oregon, but they should be asking the cannabis community ‘what should we do here?’, you know?”
“We are trying to beat the black market and I am right here with the state to help them every step of the way but, boy, I hope they start to listen a little bit,” explained Nickerson.
Tax losses are huge already
The 420 Club in the City of Roseburg, Oregon, was the first licensed marijuana dispensary located in Douglas County, a county that still bans cannabis businesses due to a commission-imposed ban ordinance. The attempted repeal attempt failed in November 2016. Roseburg, however, has allowed dispensaries since 420 Club opened on November 6, 2014, and recreational sales eventually were allowed, too. One of the selling points for recreational cannabis to the city of Roseburg and an main argument for lifting the ban in the county was the tax benefits.
Four dispensaries were operating in Roseburg and 420 Club alone was contributing $18,000 in tax to the Oregon Department of Revenue every month, but that changed in October with the shortage of concentrates and edibles, and in some cases flower, for a few weeks.
“For the last two months we have collected $10,000 per month in taxes, but in the previous year we were collecting about $18,000 a month,” explained Hoyt. “As soon as the state started messing with the testing [on October 1, 2016], our sales dropped 40%.”
“However, now we aren’t collecting any taxes because of not being issued our license yet,” he told us. “We’re obviously not collecting anything for the state in taxes.”
They started their application process at the beginning of December and have faced delays similar to what other dispensaries have encountered. They submitted their application somewhat late because they had very low inventory and nothing available due to the testing backlog and timing of that with harvest. The same timing happened all across the state as dispensaries struggled to stock their shelves before the switch to OLCC retail sales.
“They did all the testing changes at harvest time, and that’s something you just don’t do because everybody and their brother has herb to be tested,” Hoyt pointed out. “That was just the wrong time to do what they did.”
It’s a widespread problem
“This was a completely avoidable disaster,” explained Casey Houlihan of the Oregon Retailers of Cannabis Association. “Several agencies dropped the ball and are now pointing fingers at one another, while our industry grinds to a halt. Scores of shops are scaling back employee hours, forced to turn away would-be customers because they are stuck waiting for a rubber stamp.” 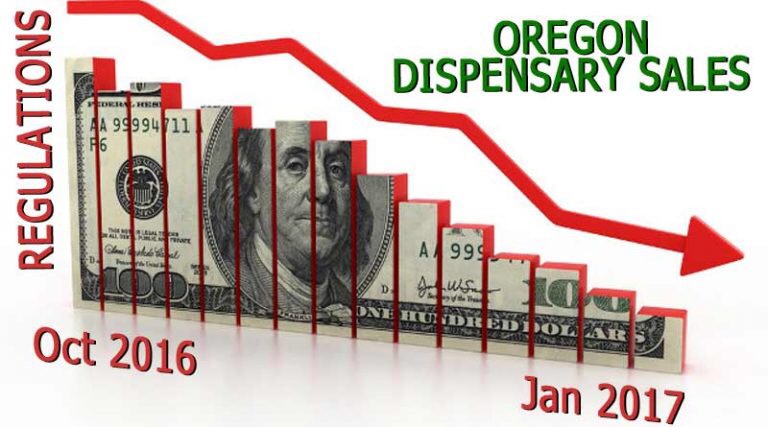 The association has been working to help cannabis businesses in Oregon negotiate policy issues. Their membership includes about 120 businesses and 65 dispensaries. They have provided guidance and input to legislators and administrators over the past few years in an attempt to prevent onerous rules and stifling regulations from being placed on the industry. They continue to address problems and suggest solutions to rulemakers and legislators.

“This was not the legislature’s intent when they passed ‘early sales’ [SB 460] in 2015,” Houlihan said. “The Oregon Retailers of Cannabis Association is doing everything we can to develop and organize for a solution to the current crisis, and we are working with policymakers to help make that happen.”
The number of licensed cannabis OLCC retailers (dispensaries) in Oregon as of December 30, 2016, was 216, according to the OLCC website information atwww.oregon.gov/olcc/marijuana. Of those only 178 have active licenses. 314 medical marijuana dispensaries remain on the OHA list, which is can be found at http://public.health.oregon.gov/DiseasesConditions/. on their website. Rob Patridge, OLCC Chairman, told OCC that as of January 4, 257 applications have been approved.
Is there a solution?
The deadline was put in place by statute, so legislative action would be required to change it. But the problem is immediate and serious, so waiting for the legislature to take care of this is no solution at all. Unfortunately, it appears that is a major roadblock.
Patridge explained:

“OLCC remains committed to expediting late filing applications and has been taking steps throughout the year to facilitate a quick transition, including working directly with applicants to complete their applications. Applicants can speed up the process by inventorying their products and completing their Inventory Transfer Requests. The December 31 deadline cannot be changed without legislative action since it is in statute. The deadline has been in place for 17 months, starting on July 27, 2015, when SB 450 became effective. The OLCC has been accepting applications for a year and retailers that applied and were ready have been approved through the OLCC’s expedited process. As of yesterday, 257 retail licenses have been approved and staff expects more to be approved shortly as applications are completed.”
We also reached out to Rep. Ann Lininger, who co-chairs the Joint Committee on Marijuana, but received no response.
The reasons for delays are numerous and many have been forced by local regulations, inattentive landlords, rules changes and myriad reasons other than procrastination. If they have already paid the application fee and are already a licensed dispensary under the OHA, is there no way to allow them to continue to operate?
Let’s hope a solution can be revealed sooner rather than later.